Impressions on multiple implants: is it possible without splinting? 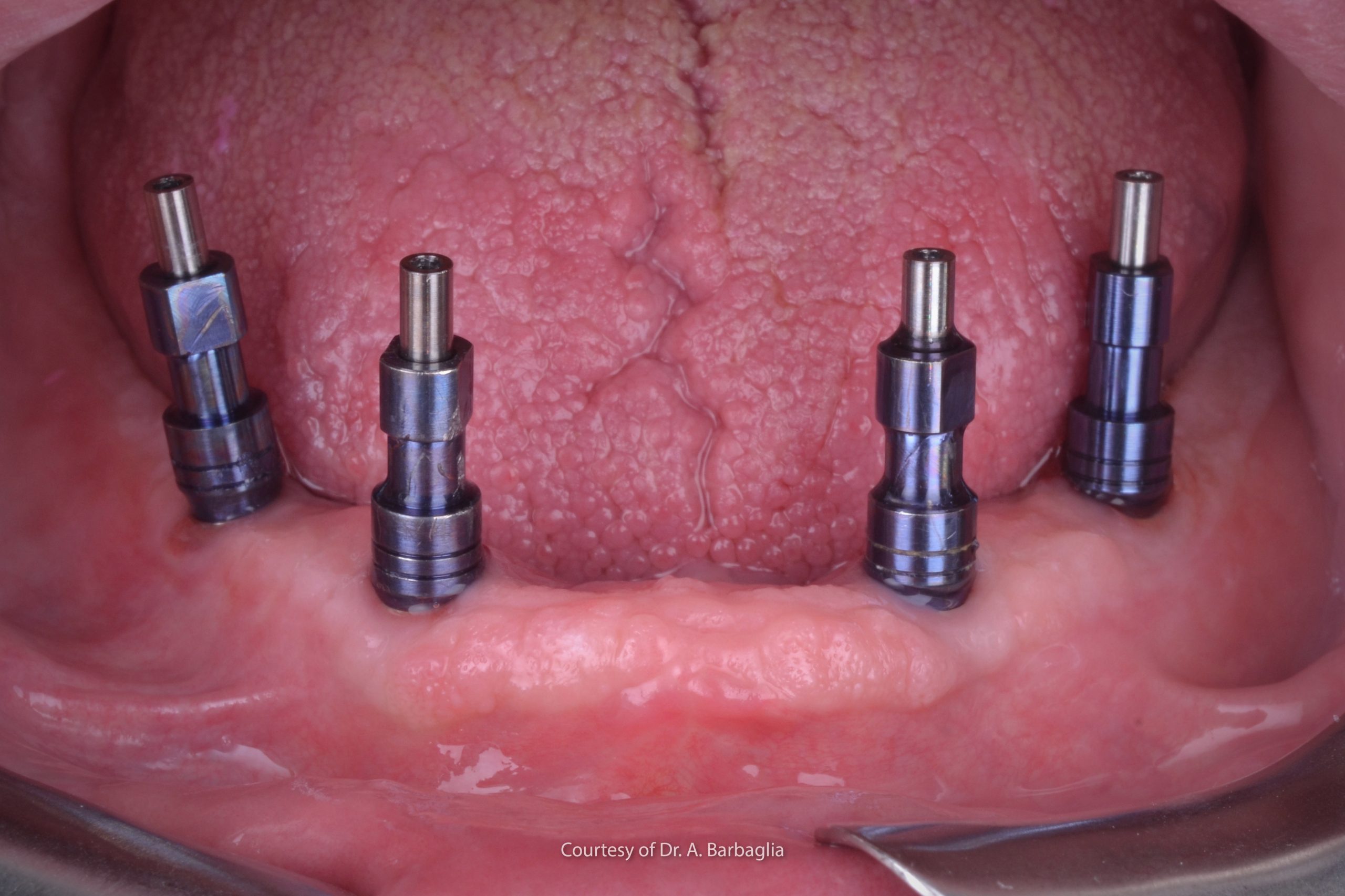 The purpose of impressions on implants and prosthesis passivity

Impressions on implants have always been a complex phase and one that is crucial for proceeding with a correct prosthetic rehabilitation. The purpose of impressions on implants is to record their three-dimensional position in the dental arch , their inclinations and the spatial relationships with other implants or oral structures (such as teeth, alveolar crests and soft tissues) as accurately and precisely as possible.

By virtue of their rigid connection with the bone, it is extremely important that the prosthetic structure connects passively with the implants in order to relieve permanent tensions and stresses on both the biological tissues (bone and peri-implant soft tissues) and the components of the prosthesis1,2. The passive adaptation of the prostheses on multiple dental implants therefore depends, firstly, on an accurate impression, but also on the application of a correct impression-taking technique3.

Techniques for impression-taking on implants

This difficulty in removing the impression tray from the patient’s mouth, due primarily to undercuts that the impression has to pass and areas of retention in the oral cavity, is undeniably a factor to be taken into consideration, as the majority of impression-taking errors originate from this procedure. The risk of deforming the material following removal from the mouth, with displacements of the transfers within the impression is higher the more slanted and not parallel to one another the implants are,6 and it also increases with an increase in the length if the arc of the circle formed by the distribution of the implants within the arch7.

Should the impression transfer rotate on itself during this phase, the risk of mobilising it during the development of the gypsum model would be very high. As we know, the development of gypsum models (setting reaction) is characterised by an initial contraction of the material followed by a subsequent expansion phase. Therefore, it may be the case that during the model casting phase the transfer-analogue unit may be displaced within the cast impression, due to the contraction and expansion of the gypsum. Also in this sense, the splinting of the transfer may prove useful in preventing problems.

Various techniques have been proposed for clinically stabilising transfers during the phases of impression-taking 4. The use of acrylic resins that undergo limited dimensional contractions, used either alone or in combination with other rigid materials (metal wires or fibres) connected to the impression transfers is undeniably the technique that is currently most used by dentists.

The advantage of this technique is that it can be carried out easily without requiring any special equipment. However, it calls for considerable chair time, with potential technical difficulties if the transfers are in awkward positions (rear upper arch). There is also a risk of displacing the transfers following the contraction of the resin, especially when methacrylic resins are used. As is known from literature, the entity of the contraction depends on the volume of resin used to connect the various transfers and the time that elapses between the taking of the impression and casting9,10.

In order to avoid the inconvenience of resin contraction, certain dentists privilege other techniques, such as bonding the transfers using direct intraoral electrowelding with a single titanium bar or other metallic materials using welders with copper tips 11. These techniques involve melting titanium structures that are therefore taken to melting point (1660 °C), extremely quickly (2-5 milliseconds) through the passage of a given quantity of electrical current from a welder with copper tips (Mondani intraoral welder).

Thanks to the different heat conduction properties of the copper present in the electrodes and the titanium parts, the heat generated by the procedure is rapidly dissipated and subtracted from the welded system. However, it cannot be ruled out that a certain quantity of heat may be transferred to the surrounding biological tissues, even if these systems would generally appear safe when used with dedicated components and certified welder settings.

Studies published in literature have reported that, although transfer splinting clinically involves a significant increase in chair time, impressions on implants are considerably more accurate when the transfers are rigidly splinted together3,4,7.

Even for digital impressions, transfer splinting, including with non-rigid systems, would appear to increase impression accuracy12.

For these reasons, impression-taking on multiple implants is only possible without splinting in selected cases in which, for example, the arc of the circle formed by the position of the implants is not particularly large. Or when the implants are parallel to one another or positioned with a limited slant, such as to allow easy removal of the impression from the patient’s mouth without exerting particular forces.

It is also important, especially in the case of implants that are not parallel to one another, to use an impression material that is rigid but that at the same time has a certain elastic return in order to compensate the forces exerted during the removal of the impression from the oral cavity without being distorted. As indicated in literature, it is therefore more appropriate to use polyvinylsiloxanes than polyethers when the impressions are taken on slanting implants that are not parallel to one another13.