Hard and Soft Relining: when to use one and when the other 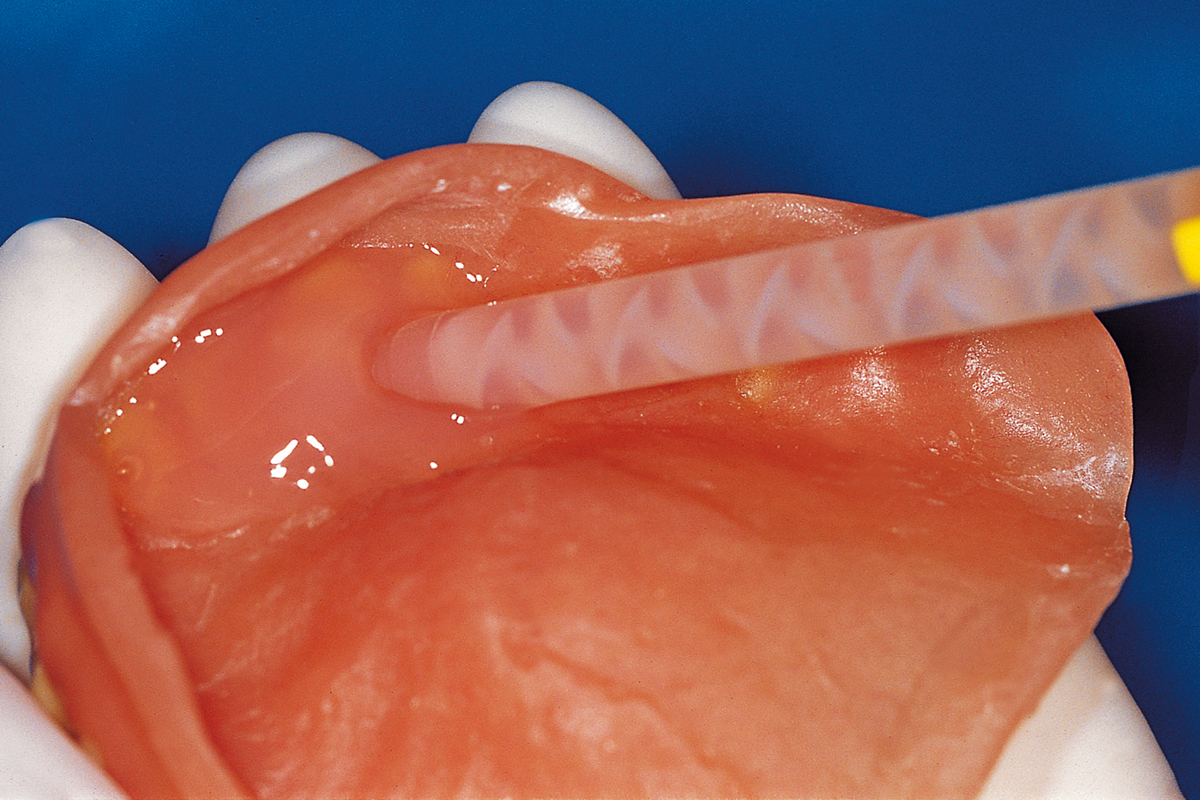 The purpose of denture relining

Denture relining materials are extensively used in dentistry to remodel the surfaces of dentures that come into contact with the soft tissues of the oral cavity1.

These materials are extremely useful in a number of clinical situations. In most cases, dentures are relined in order to compensate the effects of the bone resorption that inevitably involves the osteomucosal tissues subject to compression exerted by the denture.

However, relining materials are also used in the case of denture fractures, for the remodelling of the alveolar crests2–4, in the presence of a split palate5, when mucosal lesions appear6 and in soft tissue conditioning after the implant osteointegration period,7 where they are also useful for absorbing part of the masticatory load4,8.

A distinction is usually made between direct and indirect relining according to whether the relining of the prostheses is performed directly inside the patient’s mouth or by the dental technician on a model. Both types have pros and cons. For example, direct relining has the advantage of allowing the dentist to never leave patients without their dentures. Furthermore, as it does not require the intervention of a dental technician, this type is also less expensive. Indirect relining, on the other hand, has higher costs, but is also more accurate and better finished than the former type.

There are various types of materials for prosthesis relining: heat-curing (most commonly used in dental laboratories) or self-curing (most commonly used in dental practices because they are quick and easy to use)9,10. However, according to their consistency, the two most popular and best known types of relining materials are Soft Relining and Hard Relining.

The term “Soft “Relining” refers to a class of resilient materials used to reline the prosthetic surfaces in contact with the oral mucosa and they are usually polyvinylsiloxanes (silicones) or acrylic resins. Soft relining materials must be elastic and absorb the occlusal load by acting as a shock absorber. They may also be classified as short- or long-term, according to whether they maintain their resilience for more or less than 30 days11.

“Hard Relining”, on the other hand, refers to a kind of relining with non-resilient materials, constituted by hard resins such as the polymethyl methacrylate that denture bases are made of5,6,12. These materials are generally less popular with patients than soft relines, which are considered more comfortable, but they are characterised by a longer duration10,13–15. In addition, as they are made of the same material as the denture, they give it greater rigidity.

Uses of the different relines

In partially or totally edentulous patients who wear dentures, bone resorption is a constant, inevitable and irreversible phenomenon. This means that, once patients have been wearing their denture for some time, they gradually become less stable. A possible solution in these cases may be Hard Relining, made of the same material as the base of the denture.

Another case is that in which a patient receives a pre-extraction denture immediately after a dental extraction. In these cases, it is more appropriate to use a soft material that absorbs masticatory loads and does not release any molecules (monomers), in order to avoid interfering with tissue healing. Soft lining can also be a solution in the case of mucosal lesions under the base of the denture.

Following implant positioning, with a view to replacing a denture, it can be useful to reline the denture with soft material to be kept in place for the duration of osteointegration, as well as lightening loads in the areas where the implants have been placed.

In clinical cases requiring the restoration of flange prostheses, or when the prosthesis body needs to be thickened for any reason (e.g. in the case of microfractures, etc.), Hard Relining can be a suitable solution.

Relining materials are non-invasive, easy to use and cheaper than making a new denture14,16,17. However, poor or absent adhesion to the prosthesis, roughening and changes in the hardness/elasticity of the materials are all factors that favour the build-up of bacteria that greatly compromise the duration of the relining5,18.

The presence of superficial and porosity defects is a problem common to all relining materials, which therefore over time tend to trap odorous and pigmented molecules10,19, absorb water10,18,20, and change colour3,16, consequently becoming difficult for patients to clean and destined, sooner or later, for replacement21. In addition, the premature hardening of the resin material due to the solubilisation of the plastifiers6,18 is a common problem with rigid or semirigid relining materials.

However, the success of relining depends to a large extent on the force of adhesion between the material and the resin base of the denture1,2. A lack of adhesion between these two components due to an ineffective bond with the denture or a low cohesive force results in the detachment of the reline and bacterial colonisation, thereby reducing its longevity and increasing the risk of stomatitis. According to Ahmad et al.1, better adhesion is obtained when the chemical properties of the materials are similar. Reline adhesion to the polymers of the base depends on the chemical composition of the materials involved12 and it is influenced by the type of resin, the heat cycle and the surface treatment12,18. This is probably another reason why Soft Relining has a shorter duration than hard relines, which are made of materials that are more similar to the denture base.

It has also been shown that the application of relining14,15, surface treatments with peracetic acid or tribological-chemical silicification 22,23 and the physical-mechanical changes caused by the preventative disinfection of the denture bases21,24,25, improve the adhesive properties of the surfaces, reduce roughness and maintain the mechanical characteristics of the materials for longer.

Prosthetic relining materials are considered important, affordable materials that can be used in a number of clinical situations. Although many of them can still be improved with regard to certain aspects in order to guarantee a greater duration of the relining, they are nevertheless provisional solutions that are useful for postponing the need for a new denture, which cannot, however, be put off forever.

10. Dimiou, A. M., Michalakis, K. & Pissiotis, A. Influence of thickness increase of intraoral autopolymerizing hard denture base liners on the temperature rise during the polymerization process. J. Prosthet. Dent. 111, 512–520 (2014).

Contattaci
Back to Magazine »